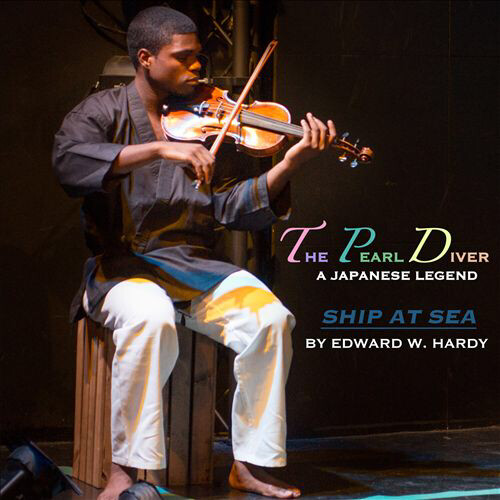 The Pearl Diver: A Japanese Legend (Ship at Sea)

Score (Solo Violin. Ocean Drum Sheet Music is not included and was improvised for the recording.)

This legend relates the story of a poor Japanese Pearl Diver who unknowingly meets the son of a powerful Japanese Nobleman traveling incognito. He is on a quest to recover a special jewel sent by the Emperor of China to Japan to honor the father of the Emperor's grieving Wife after her father dies. Unfortunately, the Sea Dragon learns of this good deed, sinks the ships carrying it, takes the pearl back into the sea, and adds it to the other treasures in his garden under the sea. The Pearl Diver and Nobleman eventually fall in love, marry and have a child. After their son is born the Nobleman's Father appears to him in a dream, asking him why he does not pursue recovering the pearl from the Sea Dragon. When his Wife, the Pearl Diver, asks why her husband seems so moody, he reveals who he is, and what his quest is about. He is the brother of the Empress of China and head of a very important clan in Japan. She determines to help him and knows where the Sea Dragon's cave is in the sea. They develop a plan, she dives down to the cave and bargains with the Sea Dragon: If the Dragon will show her the magic pearl she will sing him a very sweet song in exchange. He finally agrees and she sings a lullaby she often uses to put her infant son to sleep. The Dragon falls asleep and she steals the pearl and tries to escape. But the sea creatures wake up the Sea Dragon, and they chase her. She is eventually able to give her husband the pearl but tragically dies. This tale is told in a Japanese Noh play and Kabuki dance theater.

Save this product for later
Display prices in: USD